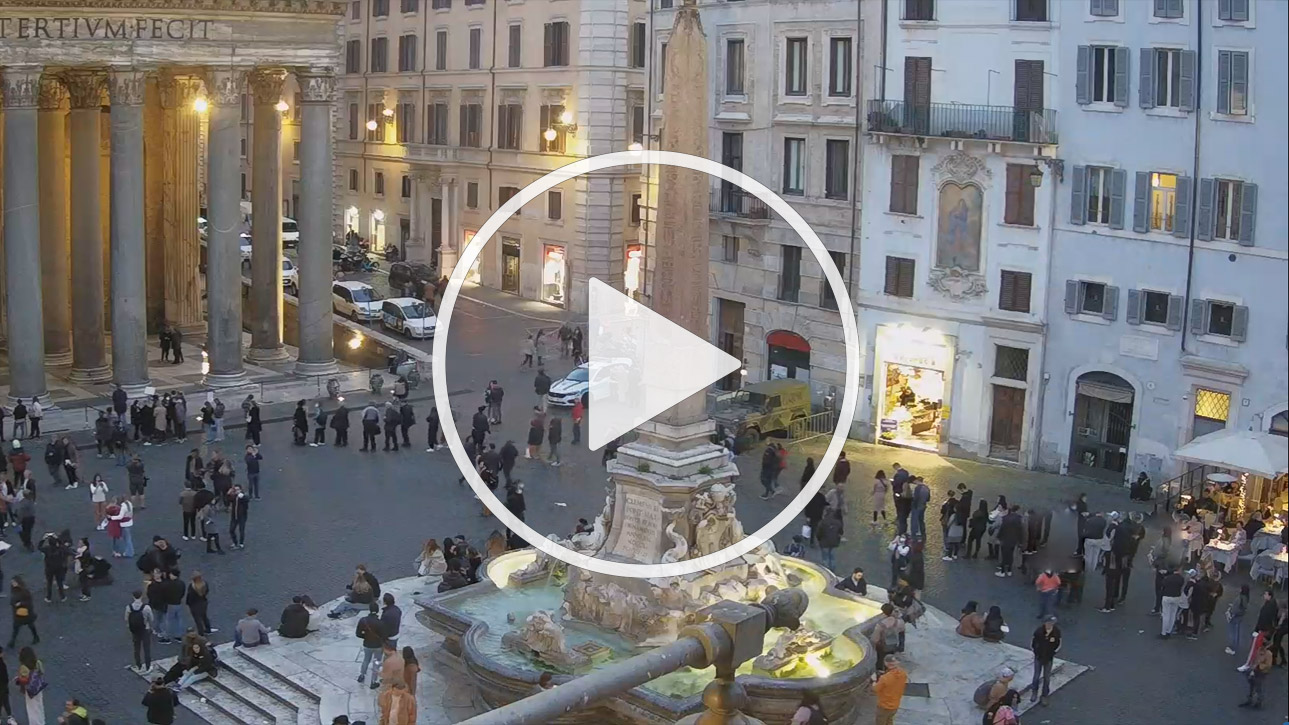 The Pantheon (from greek "πᾶν", all and "θεῖος", of or for all the gods) also worldwide known as the "Temple of all Gods" is a magnificent building and one of the most impressive testimonies to the Ancient Rome.

Originally designed to be a sacred temple dedicated to all Gods of Olympus, it was built by Marcus Agrippa in 27-25 BC as the inscription on the front of the temple reads: M•AGRIPPA•L•F•COS•TERTIVM•FECIT (from latin "Marcus Agrippa, Lucii filius, consul tertium fecit, meaning Marcus Agrippa, son of Lucius, three times consul, built this"), it is the only remain from the original temple built by emperor Agrippa; only in 609 Pope Boniface IV converted it into a Christian basilica known as Sancta Maria ad Martyres dedicated to the Virgin Mary and all the Martyrs.

The form of the Pantheon is particularly debated, its original shape reflects a traditional rectangular temple but over the centuries was damaged many times, destroyed in a fire in 80 AD, it was rebuilt by Domitian but destroyed again under Trajan's rule and rebuilt by Hadrian between 118 and 125 AD but this time in a totally different, circular design as we see it today. After the consecration as Christian basilica it enjoyed papal protection for a longtime so that was fortunately preserved from abandonment, destruction and acts of vandalism; restored again by Pope Eugene IV, it was later embellished by paintings and architectural details of extraordinary beauty and prestige that made it one of the most beautiful architectural treasures in the world.

But it doesn't end here... the Pantheon is proud of being the first temple in the history of the world built for the common people and still the largest surviving concrete dome from antiquity while all the rest of Roman monuments has been shattered, moreover it boasts a splendid outer colonnade supporting a triangle pediment with the Agrippa's inscription of stunning Greek inspiration.

Even Michelangelo at his first visit in Rome proclaimed this wonder of “angelic and not human design" due to the perfection of execution and the beauty of features, moreover the temple is said to have been built exactly where Romulus, the mythological founder of Rome, at his death was grabbed by an eagle and ascended into the heavens, among the Gods.

16 gray monolithic granite columns (14 m. high) embellish the wonderful Pantheon's pronaos, the main entrance is really impressive, the imposing bronze door (7 m. high) opens into a huge and perfect sphere symbolising the vault of heaven, once entering it, it’s easy to understand why... everything fits into each other so harmoniously that the scene has a strong and immediate effect on visitor, the vast empty space makes everybody feel so small and insignificant in relation to the immensity of divinity, 7 arched recesses and the huge Oculus (9 m. in diameter), the main source of natural light in the interior, add elements of prestige to this so majestic masterpiece.

Regularly active as a church, the Pantheon is visited today by hundreds of tourists from all over the world, catholics and locals who love to stay in Piazza della Rotonda as well, both a must while staying in Rome. The square was named after "Rotonna" (la Rotonda) as the Pantheon is still today affectionately called from Romans and also known as Chiesa Santa Maria della Rotonda once converted into a Christian basilica.