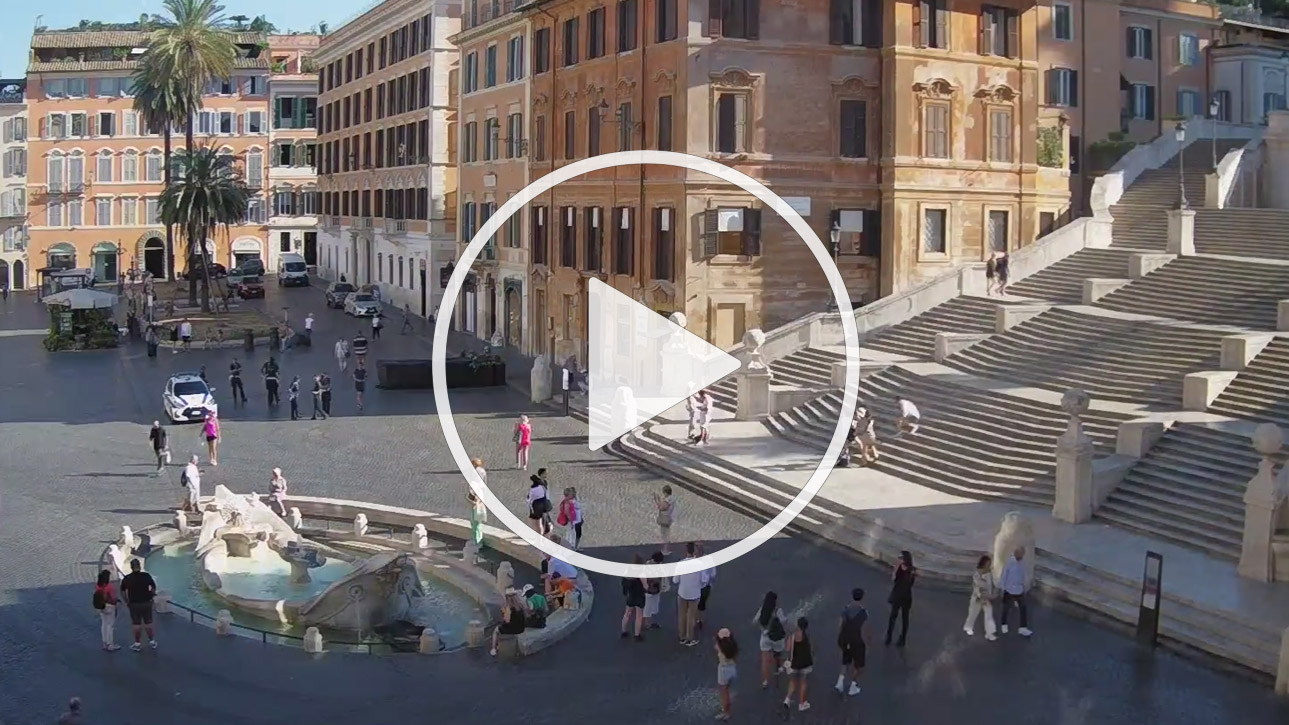 Piazza di Spagna is one of the most beautiful and elegant squares in Rome, an illustrious landmark and a symbol of the Eternal City, the pleasant combination of the monumental staircase, the famous Spanish Steps (scalinata di Trinità dei Monti) with the Church, the Fountain of the Ugly Boat (Fontana della Barcaccia) and the imposing Column of the immaculate Conception (Colonna dell'Immacolata Concezione) makes it one of the most famous tourist attractions of the world.

Shaped like a butterfly, it is located on the Pincian Hill and was originally named after the Spanish Embassy situated in the square; Piazza di Spagna is one of the most stunning scenarios in Rome, not only as masterpiece of extraordinary beauty but from the 16th century also as favourite meeting place for many artists, intellectuals, writers, film directors and stylists all attracted by its charm.

The square is embellished by monuments with a high cultural and historical value admired everyday by hundreds of tourists from all over the world; the early baroque fountain called Fountain of the Ugly Boat (1629) just below the Spanish Steps dominates the whole square; commissioned by Pope Urban VIII (the emblems of the papal family and Barberini crest are clearly represented) and designed by Pietro and Gian Lorenzo Bernini, it was named after a weird old boat landed here during the aggressive flood of 1598.

Tourists and locals love to stay here for a little bit or flock to the Spanish Steps to sit and relax; this wonderful stairway designed by Francesco De Sanctis (1723-1726), is made up of 135 stunning travertine steps, beautifully maintained, it is often adorned with colourful fresh flowers; the final execution was preceded by great debates over how to fill the enormous space around, the solution was a magnificent work enriched by scenic effects and deep perspectives according to the guidelines of the greatest baroque architecture. The stairway was commissioned and inaugurated by Pope Benedict XIII during the 1725 Jubilee, originally built to connect the Church Trinità dei Monti on the top of the hill with the Spanish Embassy, it offers today unrivaled views over the square and a large part of the city.

This lovely church, dating back to the 16th century, is located in Campus Martius (Campo Marzio) in an imposing position above the Spanish Steps, designed by Carlo Maderno and commissioned by the king Louis XII of France, it was consecrated at the end of the same century; noteworthy are the famous façade with its two perfectly symmetrical bell towers and the Sallustiano Obelisk (Obelisco Sallustiano) of the end of the 18th century rising on the top of the Spanish Steps.

Piazza di Spagna is surrounded by a charming atmosphere, important streets and elegant buildings, the Palace of the Propagation of the Faith (Palazzo del Collegio di Propaganda Fide) designed by Bernini and then Borromini is worth a mention; in front of its façade we can admire the Column of the immaculate Conception with a bronze statue of the Virgin Mary atop, a work of Giuseppe Obici, it was discovered in 1777 in the site of the former Campus Martius.

On the right side of the stairway it is located the English poet John Keats' home and the so-called Casina Rossa (Keats-Shelley Memorial House) while on the opposite side there is the twin palace housing the famous Babington's tea room; moreover the main Roman roads, such as the crowded Via Condotti, the street of the Italian fashion, the elegant Via del Corso, Via del Babuino and in parallel Via Margutta intersect and merge together into the square.