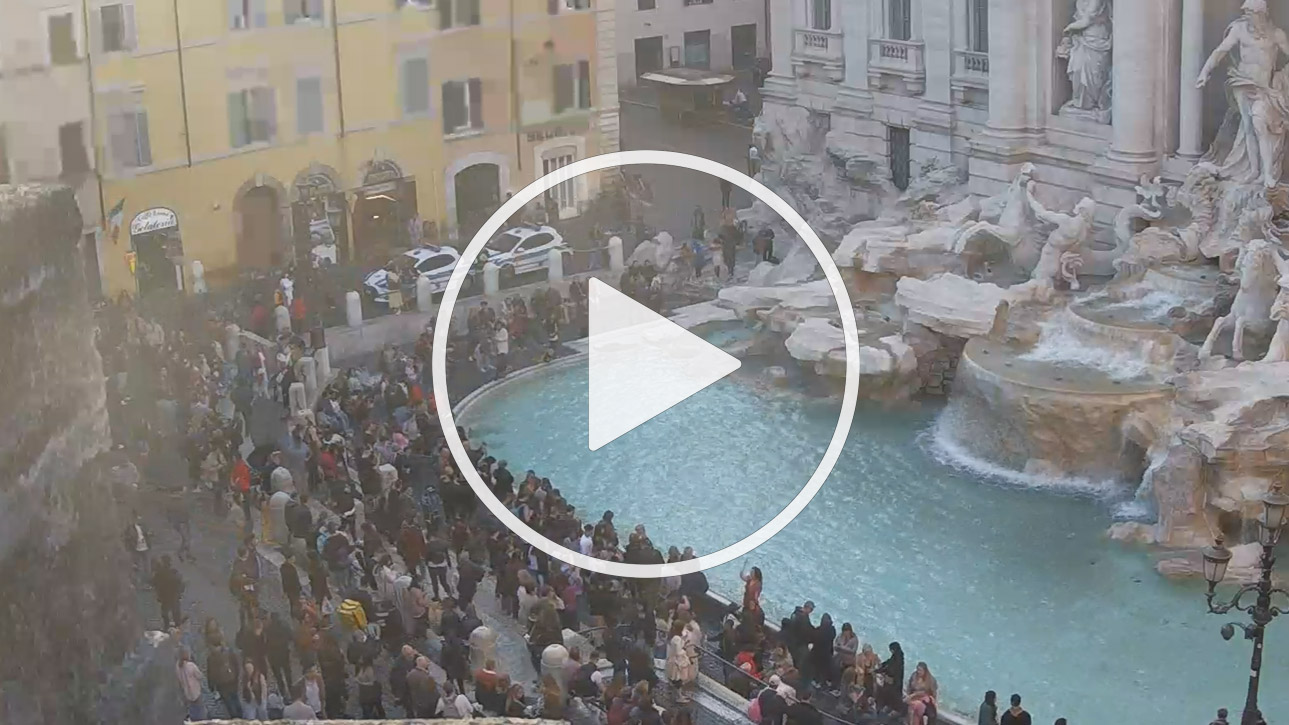 It is one of the most famous and recognizable symbols of Rome in the world and one of the most beautiful fountains of the Italian capital, an impressive masterpiece of late Baroque architecture, sculpture and engineering (1735) by Nicola Salvi, Trevi Fountain (Fontana di Trevi) and its magnificent backdrop Poli Palace (Palazzo Poli) dominate Trevi Square (Piazza Trevi).

The construction of the Aqueduct Virgin (Aqua Virgo, Acquedotto Vergine), still in use since the Emperor Augustus' period, has strongly influenced its history, it seems that its name derives from the Latin word "trivium" (Treio), meaning a crossing of three roads, the fountain marks the exact terminal point of the aqueduct; the ancient three spouts pouring water into three separate tanks were replaced in 1453 with a larger rectangular basin by Leon Battista Alberti upon the desire of Pope Nicholas V; the aqueduct was later restored in obedience to Pope Pius V's wishes in 1570 and in 1640 taken again in consideration upon request from Pope Urban VIII by Gian Lorenzo Bernini whose assignment was to embellish the fountain and the square with a more imposing style.

This in order to glorify the close Barberini Palace (Palazzo Barberini); the square was partly enlarged and the fountain resited from the other side of the square to face the Quirinal, unfortunately after a few years the project was abandoned due to pope's death and the lack of funds; since then the fountain underwent numerous but unsuccessful interventions until the Dukes of Poli, the new Pope Innocent XIII's family, decided to expand their property by including a palace in Trevi Square with a fountain lying on its façade, but only in 1731 the direction has finally changed, Pope Clement XII set up a competition to find an artist able to rebuild the fountain, the winner was Nicola Salvi who proposed to work on the basis of some original Bernini’s sketches, four years later the fountain was partly completed; after a number of different vicissitudes and sculptors only under the Pontificate of Pope Clement XIII and the work of Giuseppe Pannini the fountain was finally completed and inaugurated in 1762.

Trevi Fountain is really impressive, the taming and the power of the waters its main themes, the large rectangular basin with rounded corners collects waters flowing from different points, in the middle of a long rocky reef a magnificent statue symbolizing "Oceanus" (Neptune, Nettuno) emerges from a large niche standing atop a shell-shaped chariot drawn by two winged horses (representing the changing mood of the sea, calm and rough waters) both led by two mermen; two smaller side niches flanking Ocean host "Healthiness" (Salubrità) and "Abundance" (Abbondanza).

Although Salvi engineered the general concept, the magnificence of the fountain and the complexity of its statues have required the participation of many artists, "Oceanus", the horses and the mermen, for example, were initiated by Maini but after his death finished by Bracci, "Healthiness" and "Abundance" are della Valle's works, the two bas-reliefs have been carved by Bergondi (Agrippa) and Battista Grossi (the Roman virgin), the four upper statues are Corsini, Ludovisi, Queirolo and Pincellotti's works, this last one was also involved in the work of the reef, the pope's coat of arms was made by Benaglia; the curious travertine vase, the so-called Ace of Cups (Asso di Coppe), that actually has nothing to do with the whole structure, is said to have been placed by Salvi in a strange position to cover the view of a next fault-finding barber, who from his salon didn't spare his bitter remarks about the works.

Trevi Fountain is today a real must-see attracting a very high number of daily tourists who, according to the tradition, throw a coin into it on their back to ensure a return trip to the Eternal City; but this masterpiece has been an inspiration to poets, artists, musicians, and filmmakers as well, how to forget it as romantic location in the most iconic scene in Fellini's "La Dolce Vita" starring Marcello Mastroianni and Anita Ekberg.